Beyond “Just Say No”: Parenting Tips 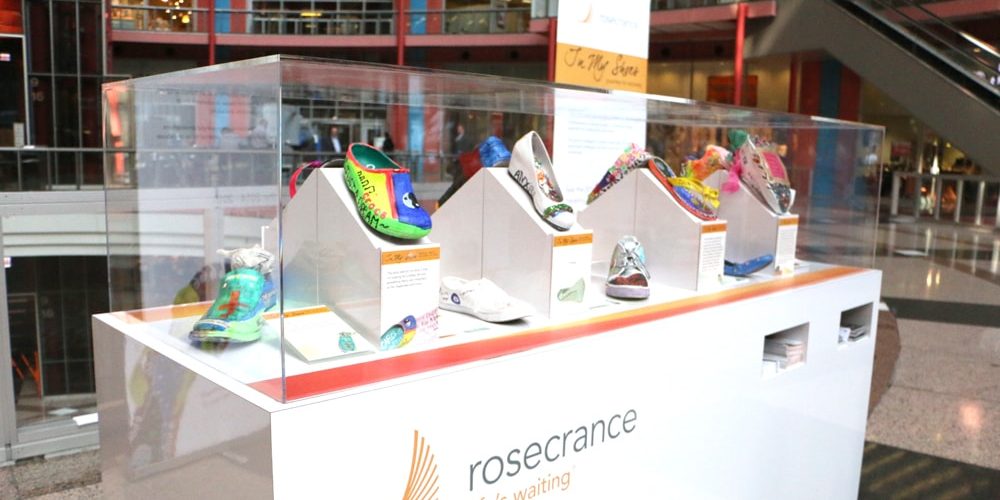 This article was originally posted on the elizgreene.com website:

Recently my 14-year-old daughters and I attended the “In My Shoes” exhibit at the Milwaukee Public Library. Hoping to spark conversation between parents and teens, the exhibit was created by teen patients at Rosecrance’s adolescent campus in Rockford, Illinois, the exhibit displays shoes that have been painted and decorated by teens to tell their story about substance use. I was contracted to blog about the exhibit, and was interested to see if it would indeed spark conversation.  Here is what happened in the car on the way back from the exhibit:

Me: “So, it seems like the exhibit was designed to get kids and parents talking about substance abuse. Do you think we talk about that enough?”

Hmm… that is interesting.  It is true. Even the conversations my husband and I have had with them has been rooted in a kind of right vs wrong, disciplinary “Just Say No” conversation (mixed with some cautionary tales). 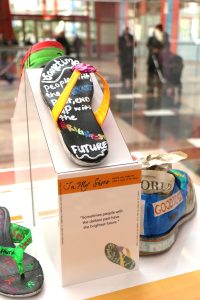 Me: “So, the stories on the shoes, do you think that was more directed at teens or at parents?”
Daughter #2: “Parents. Kids know that stuff.”

Me: “Huh, okay.  So, some of the stories were about really bad things happening to the person.  Others were about depression.  What do you think about that?”

Daughter #2: (Who had the bad luck of sitting in the front passenger seat and was more socially forced to participate in this somewhat uncomfortable conversation.  When I asked about the discomfort level the both agreed it was less uncomfortable than talking about sex, but a very close second.) “It seems like they we all trying to get away from pain or feel better using drugs or drinking.”

This lead to a rather long conversation about self-medicating and why some kids may be more at risk than others.  Right now my girls live in a happy bubble.  They haven’t yet been exposed to even the opportunity to “Just Say No.”  But we all believe that day will come.

The girls and I had a good conversation, and later we continued with my husband too.  I don’t kid myself that one conversation will inoculate my girls from the possibility of substance abuse.  We’ve been honest about the family history of dependency and the dangers of even “social” use. This will have to be an on-going dialogue.

I’m grateful for the spark of conversation the “In My Shoes” exhibit and the resources materials it provided.  I’m excited to participate in the #InMyShoes tweet chat tonight at 7 pm Central Time.  http://www.rosecrance.org/twitter-chat/

The “In My Shoes” exhibit will open to the public on April 1, 2015, at the Central Library at 814 W. Wisconsin Ave., where it will be on display in the Schoenleber Reading Room until April 26. The exhibit’s April stop coincides with the National Council on Alcoholism and Drug Dependence’s Alcohol Awareness Month, whose 2015 theme is “Early Education on Alcoholism and Addiction.”

Learn more about the exhibit and other tour dates and locations at www.rosecrance.org/inmyshoes/

Click here for a Resource for talking to teens about marijuana

Find out more about Rosecrance www.rosecrance.org

Eliz is pleased to partner with Rosecrance to promote this exhibit and has been compensated for this post.  All opinions are her own.

Eliz Greene survived a heart attack at age 35 while seven months pregnant with twins. Her down-to-earth strategies to manage stress and improve heart health and reduce stress are used by thousands of busy people all over the world. She is a motivational wellness speaker, author, and job stress researcher. Visit elizgreene.com to book Eliz for your next event.
← Previous Post
Next post →

There are currently no comments.

Your personal story combined with recommendations for realistic lifestyle changes was very powerful.

My favorite part was all of the stats you had to show what increased your odd of heart disease and how you could decrease your odds. It worked out I was actually going grocery shopping yesterday so it helped to have that in the front of my mind to make sure to get some “grow foods” when I was there too.

Really practical, easy to apply tips. And they almost always fit into my busy life.

Are you an Iguana or a Border Collie?