Embrace a Sense of Humor: THE PITCH

My husband returned from physical therapy today asking, “Where is The Pitch picture?”

Suspicious of his intentions, I asked why he would want it.  Evidently he shared the story with his therapist, to the therapist’s great delight.  For years I’ve been telling the story – and always say Clay thinks it is funnier than I do… he probably tells it better too.  I figured, why not share it again?

When the girls were about 9 months old, I was asked to throw out the first pitch at a major league baseball game. Even with all my dance training, I have never been particularly sporty and really had no business being with any sport involving throwing or catching a ball. Clay tried, early in our relationship, to teach me to play softball, but after the ball rolled out of my glove, down my arm and smashed my sunglasses, he finally understood the problem. My contribution to the softball league was keeping score —at which I am quite good. Nevertheless, how many people get to throw the first pitch? It sounded like fun.

Clay thought I was nuts. He was sure that I would throw the ball into the dirt and people would boo me. “They booed the president; why wouldn’t they boo you?” he exclaimed. I decided I didn’t care. It was worth the risk to have such a unique experience.

Clay, good sport that he is, bought me a baseball for Mother’s Day and started coaching me. We measured off the distance across the front yards and he (and the neighbors) gave me pitching lessons and encouragement. I practiced and was able to throw a decent ball. Right up to the moment I walked out on the field, Clay was incredibly supportive. He kept telling me, “Block out everything else. Just focus on the catcher. Keep looking at the catcher and you’ll do just fine. You can do this.” We talked about where to stand, and I was ready. After shaking hands with the catcher, I prepared to walk out on the field. 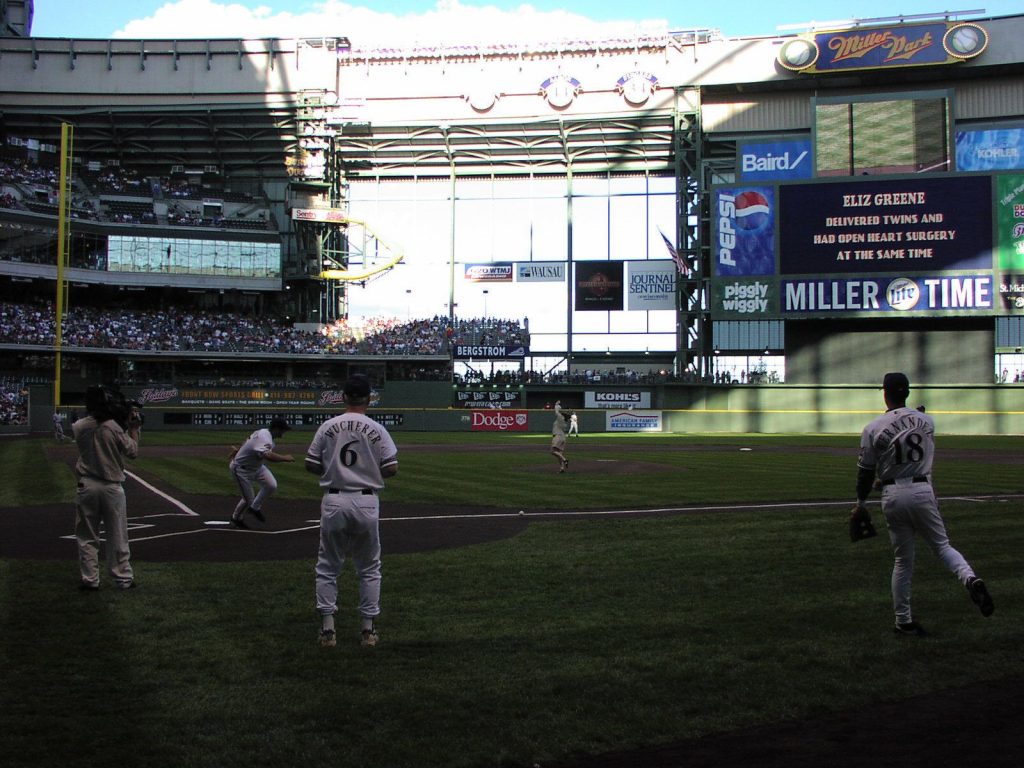 It was time, and I threw the ball. I’m not sure exactly what happened but the ball went kind of sideways and ended up bouncing and rolling to the first base line. On the giant screen, my name and “survived a heart attack while pregnant with twins” flashed up. So rather than boos, I heard thousands of people go “Aww…” My husband says they all thought I’d sustained some sort of disability from my heart attack. Rather than being embarrassed, I found the whole thing very funny. I know I haven’t always had a sense of humor about myself, but I’ve found it essential when embracing new challenges.

When I got pregnant and knew there was a possibility we’d have twins, some of my friends started teasing me immediately about how big I would get. They made jokes about having to use a boatlift to get me aboard a sailboat or rolling me up the stairs. As I got larger and larger, I became more and more of a klutz. Even my mom began to joke that I should have an alarm like trucks have when they back up. I learned quickly to laugh at myself and it turned out to be an important lesson for the time ahead. Our family has a saying: “If you can laugh about it, it can’t be that bad.” It’s true.

These are light-hearted examples of a bigger point: having a sense of humor, not taking things too seriously when they don’t work out exactly as planned is essential.

We all make mistakes, but the biggest mistake is never trying!
The biggest risk is not taking one!

Embrace a sense of humor, and risk being wrong or looking foolish. Things may not work out exactly as you planned. What do you wish you could do, but are worried to try? Try, without risk there is no zest!

Now it’s your turn. What risk are you taking? How do you recover when things don’t go as planned? How do you keep your sense of humor? Please share in a comment below.

Eliz Greene survived a heart attack at age 35 while seven months pregnant with twins. Her down-to-earth strategies to manage stress and improve heart health and reduce stress are used by thousands of busy people all over the world. She is a motivational wellness speaker, author, and job stress researcher. Visit elizgreene.com to book Eliz for your next event.
← Previous Post
Next post →

There are currently no comments.

Your personal story combined with recommendations for realistic lifestyle changes was very powerful.

My favorite part was all of the stats you had to show what increased your odd of heart disease and how you could decrease your odds. It worked out I was actually going grocery shopping yesterday so it helped to have that in the front of my mind to make sure to get some “grow foods” when I was there too.

Really practical, easy to apply tips. And they almost always fit into my busy life.

Are you an Iguana or a Border Collie?